our first hive check! the good and bad news!

we opened up both of our new top bar hives for the first time today and found loads of sweet, gentle bees, a healthy-looking queen in each hive, brood in both, larvae in one, but lots of crossed and wavy, fat comb.  we tried to "fix" it the best we could, but we really felt as though we did not know what we were doing and may have actually done more harm than good.  sadly, after we pulled some of the crossed comb off, we discovered there was larvae in it, so we put in on the floor in the back of the hive, not knowing if this was the right thing to do or not.

we would love to hire someone to come over (near north valley) and help with our next hive check (probably next weekend, or should we do it sooner?) and help to make sure we get things back on track.  we could trade your expertise for lots of our fresh chicken eggs, or pay you cash.  any takers?

(i think) i attached 3 photos of the comb. 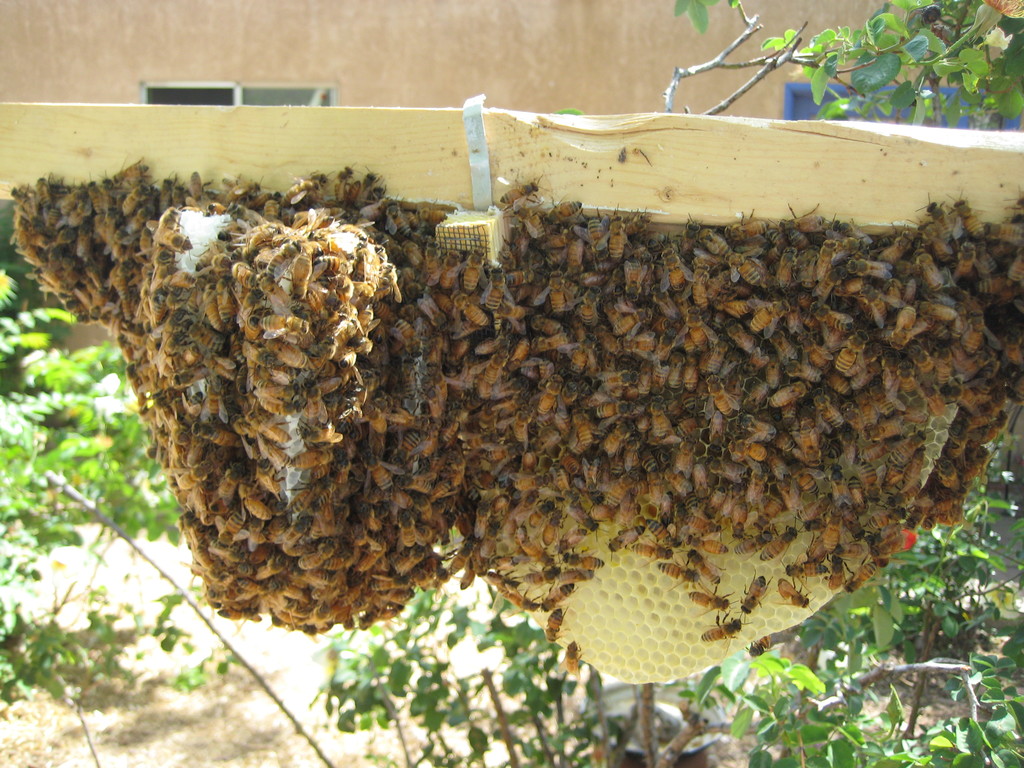 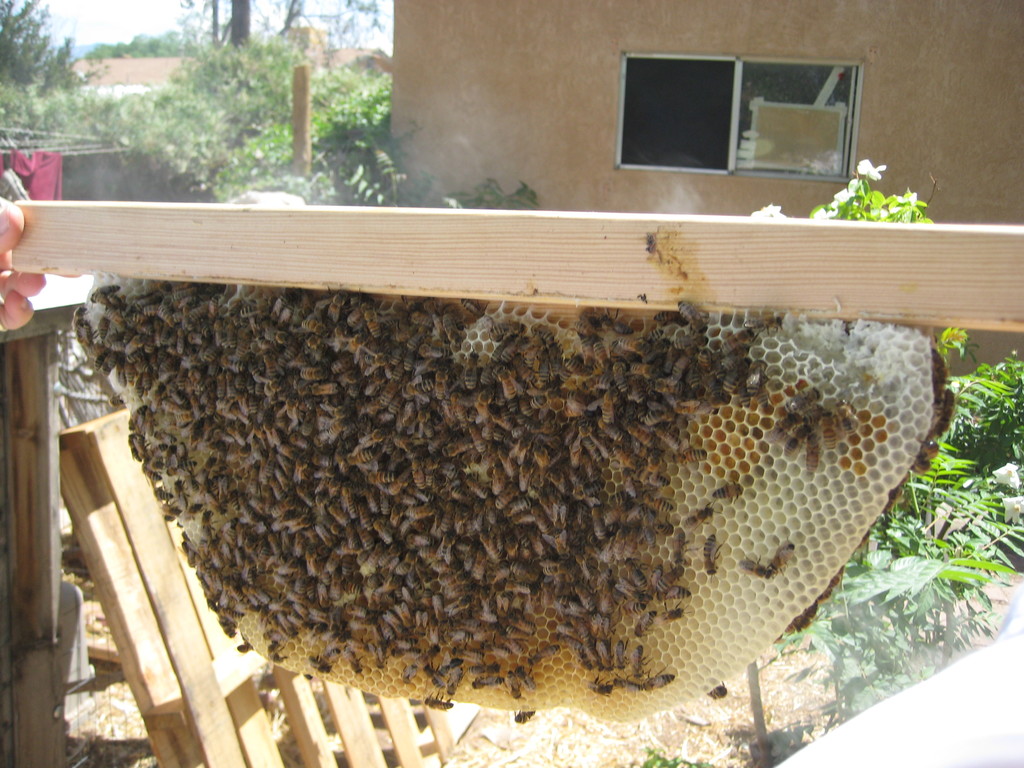 the above comb is actually doubled on the right side of the photo where it is kicking off the bar. 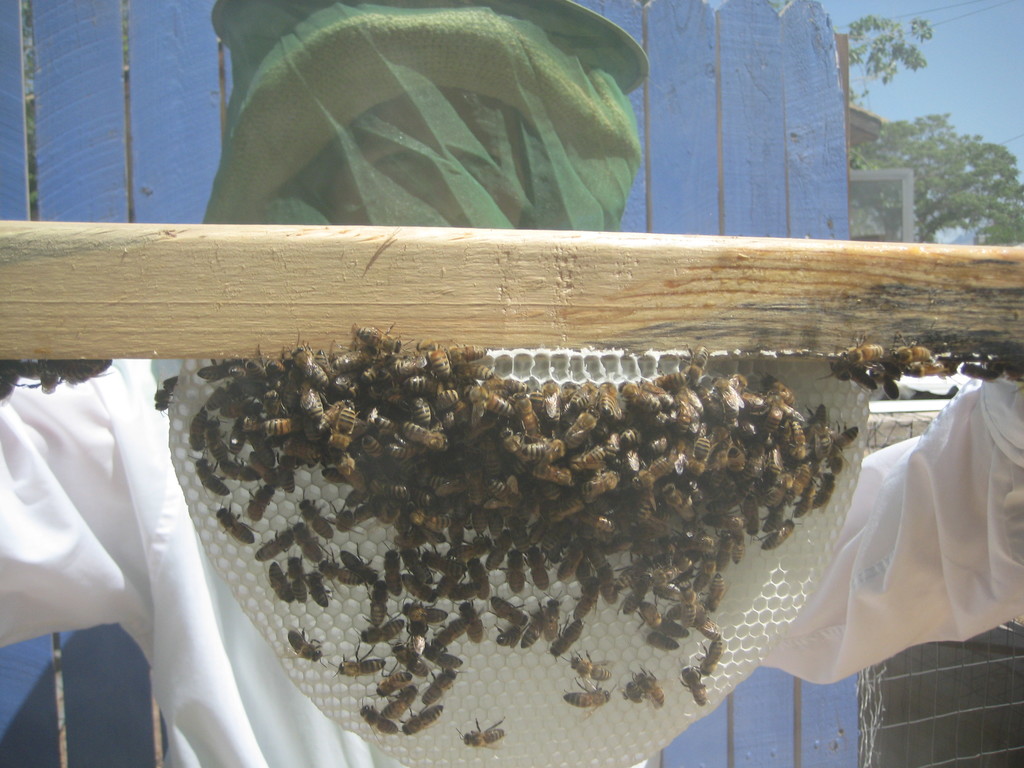 the above comb is bulging off of the bar.

Nice white comb.  We're using TJ's top bar hive design, and we're in the second year, so take what I say with a grain of salt.  It looks like you're using furring strips as the top bars, as we do (3"4 thick by 1 3/8" wide).  However, we put the wide side down flat, not the short side down.  That gives the right amount of spacing, and we've never had cross combing issues.  From you pictures, I think you're putting the short side down, making too little space for the bees to build, and contributing to cross combing.  I'd suggest putting unbuilt empty bars wide side down in between the combs you have, to give them space.

On the waviness issue, we've not had a problem with that with TJ's design.  A difference is that he/I tacks a guide piece of wood (1/2" quarter corner pine molding, or a routed in strip if you want to be fancy) down the center of the underside of the bar, giving a straightedge for the bees to build off.

First, congratulations!  I think it looks pretty good!  I think you did all right with what you had.  The bees will still take care of the brood if they can, even if it is not hanging from a bar.  If the weather is nice you shouldn't have a big problem with that.  After the brood hatches, you will want to take that comb out to keep the problem from becoming worse.

The biggest mistake you made from what I have read is that you let the queen cage hang from the bars.  My understanding is that they will always build comb around the queen cage, and all the rest of the comb in the hive will be messed up because of it.  In a Langstroth hive you can hang it on the frame with foundation under it and the comb will be straight around it, but in a top bar hive, anything goes.  It can even get messed up in a langstroth hive, but not as easily.  I direct released the queen by opening the cage and just putting the cage on the floor of the hive back away from the opening I had in it.  I covered the opening with a finger while I put it back there.  Once I took my hand out, I immediately closed the hive up.  I took the queen cage out yesterday, just opening up the back of the hive.  As you know, the bees had already been with the queen a week or so, so there was no problem releasing the queen that way.

I use a completely different design for the top bars, and so far have not had any crossed comb.  I have had a few bits of burr comb, but that isn't bad.  My top bars have a triangular cross section, with a sharp edge on the bottom.  This does two things.  It gives the bees a very clear starting point for the comb, provides the bee space mentioned by buckner, and gives the bee more area to attach the combs, making the combs stronger.  Of course, this is a little more work to make.  TJ uses an Oak strip down the middle, which he is very happy with.  Perhaps you need to give the bees a stronger guide.  Because you are using just 2x2 furring strips with narrow guides, they are just as happy building comb between your guides as they are on the guides.  With the triangular bars, they can't even get into the space between the bars, forcing them to build mostly straight comb

We visited one apiary where the beekeeper used no guides at all.  There was a lot of crossed comb, but he didn't care.  One time he took out three frames at once.  It still worked.  If it was really bad, he just straightened it out like you did.  I bought straight comb from him to put in my hives to give the bees another guide, since they tend to always make the comb parallel.

Your eggs are great too!  Everyone should be jumping at the chance to get some!

I agree with everything Ted commented above.  Only, I think from the photos that those aren't 2x2 bars, but 2x1 bars edge vertical, which was my comment about adding spacing.

I guess Carolyn can tell which they are, but I have actually seen her hives and her top bars, which is what I am basing my comments on.

thank you for all your insight and comments.

we are using the 2x2 square furring strips in our hives, although it is difficult to tell in these photos.  we tacked quarter round as a guide, but still experienced the cross combing/wavy combing in both hives.  i am excited to do a hive check this weekend to see if things have straightened out, or have become worse.

ted, i am interested in using your triangular guide method, where do you find the supplies for this?  it sounds like i can build some top bars with better guides and then insert them in between the current combs?

the other good news is that i was hoping for a swarm to fill our third and final hive and they have arrived.  now i just hope they will stay.  i was sitting on my porch reading the other day when i looked down and saw hundreds of small shadows moving all over the place.  there was a swarm flying over my head and landing in the trumpet vine in my back yard.  my heart sank at first because i thought it was one of my two colonies absconding, but that was not the case, it was just a swarm coming from somewhere else to land in my trumpet vine.  we cut the many, many winding branches out with the swarm still attached and moved it to our empty hive.  three days later, they are still at the back of the hive hanging on the branch (we probably should have taken the branch out of there) and have not settled onto the top bars as of yet.  i am not sure they have decided to stay yet.  should we remove them from the branch, or will they move to the top bars on their own?

Carolyn, I just use 2x lumber and make my top bars.  I should show them to you some time.  You could certainly replace unused bars with these.  If I were you, I would make a few, then convert the bars you have, and keep replacing the old style with the new.

I have a theory about the swarms.  I lost one, but I am thinking now that I messed up by messing with them.  Because it has been pretty warm, the inside of the hives are pretty warm.  The bees don't have any comb to sit on yet when you just put them into the hive, so they go outside to hang around to keep cool while other bees build comb.  I think this is what happened with both of my most recent swarms.  They haven't done any significant bearding since.  You saw something similar with your swarm.  I am thinking that maybe your swarm is hanging out on the branch because it is a handy place to hang out while they are building comb.  I bet once they get the comb built they will abandon the branch.  You might want to be sure they don't have comb on the branch though.  I left the branch in with my first swarm for a week.  They were all off it at that time except for normal patrols.

day 6 and they are still not onto the front top bars...what if they are building comb on the brach?  when we open up our hives tomorrow, i am planning on taking a bar of comb from one of my other hives to put in the front of this hive to entice them up that way.  i have no idea what i would need to do if they are combing on the branch though...take the branch with the comb out all together?...move it to the front and hope they comb on the bars behind it?  sheesh, these bees of mine aren't making it easy for me, but i love them anyway.

If they have comb on the branch, you will want to keep that comb in the hive because it will probably have brood.  I like your idea about adding comb from one of your other hives.  I also suggest that you put a chicken wire cage on one of your bars and put the comb from the branch inside of it in the front of the hives.  The chicken wire won't bother the bees at all.  Put it in as the second bar, or the third bar if you add comb as the second bar.  Once you get the comb in the proper place, get the bees off the branch and get rid of the branch.