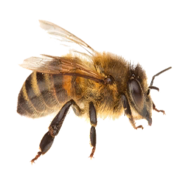 My top bar was robbed today. The entire hive was destroyed. I harvested quite a number of pounds of honey, and everything looked pretty good in there. How common is this for late October, and is this something that I should report to the Dept of Ag?

To add a bit more to the mystery.  I live just a house or two away from Doug and also have bees.  One of my hives suffered the same fate as his; no bees, hive robbed out.  My other hive, might be the robbers.  That hive seems to be thriving.

I have very little clues as to what happened with the empty hive.   This was my stronger hive but in the past month populations started dwindling which I first chalked up to drones being kicked out for the winter.  Any suggestions for post mortem to figure out what happened?  I had not opened this hive in about a month and a half but things seems fine until that point.

I'm so sorry to hear about your hive.  October/November are prime times for robbing as there is less forage out and bees are trying to acquire any resources they can before winter sets in.  If a hive is weak they can not defend themselves from these robbers and the about of robber bees visiting the hive grows exponentially as the robbers return to their own hive and tell their sisters of the source of their stolen goods.

To prevent robbing reduce entrances when the weather begins to cool--the bees then have less space they have to defend.  Make sure you don't leave out any honey or sugar water.  It's best to do in hive feeding during this time of year or find a way to ensure that bees outside of the colony you are feeding can not access the feeder.  Also, keep hive inspections quick. Bees nearby can smell resources from your hive and will come quickly to rob resources from the open hive.

I hope this helps. Unfortunately this is normal bee behavior and is not something significant to report to the NMDA.  It'd be important to go back and ask yourself why the robbed hive may have been weakened.  Best wishes for a successful spring.

In total all three colonies were lost.  My two hives were in their first season (installed from packages this past spring) and had alcohol wash mite checks in early August that came back at < 1% on both (Doug's hive also came back below treatment thresholds).  As there is a general belief that mite issues are typically a second season problem and not a first season problem, I did not do another mite check (frankly, I did not find it fun to kill 300 bees, but I understand it is required).  Nor did I install entrance reducers on the hive as we still had some warmer temps and were still quite active (I am seeing now that that activity was likely them robbing Doug's hive).  I am pretty confident both hives were takes down by verroa.  On a post-mortem, I found a verroa mite on the first capped larva pulled out.

What I have learned from this (that will hopefully be useful to others) is the following:

While disappointed in the outcome of my first season in beekeeping, I did read some advice that made me feel a little more positive.  Last spring, I started two colonies with nothing but a couple of empty wooden hives.  Next spring, my new colonies will have tons of drawn comb ready, many of these bars filled with capped honey (I extracted about 20 pounds, I estimate there is ~60 pounds left).  so that is at least one positive.

Its so hard to lose colonies--and yes, difficult to kill bees for mite sampling.

What you've learned after your first year is more than many beekeepers learn.  I completely agree with your take-aways.  Some beekeepers just get lucky in their first year, and then have to learn these things later.

I helped with about 13 hives in the north valley area this last season and I noticed enormous mite loads, mite loads that the bees can not recover from.  It was so sad to see.

What I'm learning is that controlling varroa sometimes takes a community effort.  If you have beekeepers nearby with high mite loads your bees are likely to pick up those mites if they begin robbing those weak hives.  It's the strongest hives that suffer the most from mites due to this, and because they have more capped brood cells for the mites to reproduce in. Robbing used to benefit the species, now with mites, its to their detriment.

The hives I have in secluded areas have done well at maintaining lower mite levels.  Out of 11 hives near SF I only had to treat 1 this last season.  I think hives with high mite load hive's nearby are just too much for bees with even strong genetics (VHS etc.).  At some point, I think it's more than the bees can maintain.  You'll read about strong genetics and it's usually in secluded areas, as Tom Seeley describes the bees in Ithaca, NY that have evolved to fight off the negative effects of varroa. IMHO I think we need to do more studies on the level that these hygienic bees can maintain; is there a threshold?

I follow IPM practices and I think this is helpful to make sure we are going to genetics first and chemicals last as a solution to the varroa problem.

Next year will be much easier for your bees!  You do have a lot of resources ready for them!  Make sure you freeze the comb so that you don't get wax moths.

Thanks for your helpful response.  When you get a chance, can you please describe what you do for IPM?  I have both a Langstroth and a  top bar hive.  For the Langstroth, I use a screened bottom board, mostly foundation-less frames and tried to do the drone-culling on a drone frame before drone emergence.  This became hard as sometimes they use would not build drones on the drone frame and would just ignore it and build drones on another empty frame they built (which would have both drone and worker cells so I would not cull).  For both I monitored (once) with an alcohol wash.  Beyond  that, if you have pointers for additional IPM measures I should take (besides more testing), that would be appreciated.

thanks again for your time and insight

Number one is start with good genetics.  Make sure you are getting queens that show resistance to varroa--and if you can, get local queens, as they are more likely to be able to withstand the unique conditions here in NM.

As you know, also placing drone frames and culling drone.  You can cut out drone from TB comb often times. If they don't use the drone comb in a Lang there's really not much you can do as far as culling, as you said.

Brood breaks.  This can be done by splitting the colony and allowing the queenless colony to raise their own queen (for a longer brood break) or by requeening it with good stock.  OR, caging the queen if you don't want more colonies. (larger hives tend to have larger levels of varroa at the end of the season (late summer/fall)...more brood, more varroa).

If all goes well, organic chemicals won't need to be used.  If so, my go to is Formic Pro.  It's always knocked down the mite load safely and effectively for me.  It penetrates the capped brood so you don't have to worry about more applications.  It's usually one and done.  Instructions must be followed carefully and weak queens may perish.

I tried hopguard III this year (another organic Tx), and it was ineffective--by the time I treated again with formic it was too late for some hives.  The damage had been done, the bee's fat bodies were depleted along with their immune systems, and a host of pathogens were taking over:  deformed wing virus, etc. The manufacturer recommends that it be used when there is little to no brood present.  This is difficult in regards to managing varroa, as brood levels and varroa levels are usually at their peak at the same time.

Many beekeepers here in ABQ and the area like oxalic acid.  I admittedly have not used it...yet.  It must be used in cycles as it does not penetrate capped brood.

I use apivar as a last resort and literally lose sleep over it.  It's a last resort for me, but I will use it to save colonies and knock down mite levels so that I'm not sending mites into neighboring hives.  I was on a Zoom meeting earlier this year with UMD and asked about the residual effects of apistan and they said they didn't find any residual apistan after Tx.  Apparently it goes away quickly...but do your own research. I've seen other studies that back up the claim.  It can not be used with honey supers on. I'll mark even the honey frames in the brood nest so that I know they've come into contact with Apivar so that I don't pull it for harvest.

UMD Bee Squad has a great understanding of IPM as it applies to beekeeping.  I've been looking for notes on their site regarding IPM but haven't found much.  Maybe you'll have better luck:  https://umdbeesquad.com/

The goal of IPM is to let nature be your guide--to work with it and not against, and as a last resort, use soft chemicals...and if you absolutely positively must-hard chemicals.  When I resort to hard chemicals I know I need to requeen and start at the beginning with better genetics.  On hives I've used apivar in (which is rare) I will absolutely requeen them.  This is not a sustainable way of beekeeping IMO.  Bees don't and shouldn't need us.

I hope this helps.

This is a very informative list.  Thanks for taking the time to put it here for all of us new Beeks.  I also agree with the a more Darwinian beekeeping approach, with minimal outside intervention.  It is ja hard lesson sometimes when you lose them all, but I am looking forward to utilizing this newly acquired knowledge next year.